Ichullbong Seongsan was a refreshing start to the day, and we got hungry very soon. Leaving  the Sunrise Peak, we walked to the main road by the side of which many coffee shops looked very inviting. We did not go to any of them, but did go to a more sophisticated-looking restaurant at the corner.

The smiling owner came to take our orders, and we ordered coffee. The smile vanished quickly. She said something in Korean, a bit stiffly. Realizing that we were foreigners, she gesticulated wildly, to convey that it was not possible to have coffee. We were perplexed.

Then off she went, and brought a menu. She pointed to all the food listed. We understood that she expected us to order one of those listed in the menu, and obliged by ordering a sea food soup. Still we were at a loss as to why we could not order coffee.

It was only later that we came to know that coffee was complimentary in that restaurant. Not only there, we soon found out. There are many restaurants in Jeju Island that give free coffee, along with your food. We found that such a sweet thing!

But the sea food soup that came was jumbo size, even though we had ordered for just one person. The five of us had to work hard to munch through the very crunchy octopus, squid, abalone, scallops, mussel, crab and the shrimps.  It was a meal fit for kings! 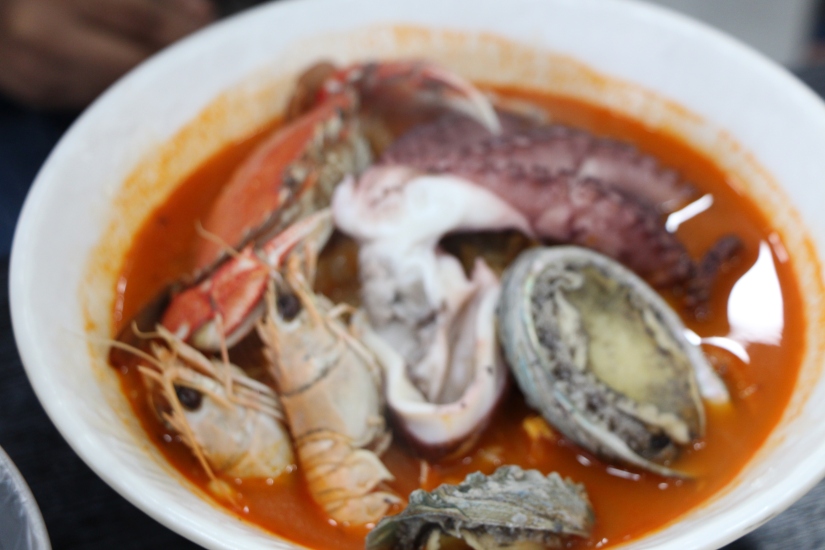 That is one more unique thing about Jeju island. Food served is aplenty. They feed you like there is no tomorrow. Often we made the mistake of ordering one dish each, when one per two people would have been more than enough. But then, with such mouth-watering Korean recipes, we could not complain. Korean food, in fact, was one of the highlights of our trip, and something we will always remember fondly.